Lacanian psychoanalysis does not wager, believe, nor is it interested in the psychoanalysis of the masses. Psychoanalysis is done one-on-one. However, this does not mean that psychoanalysts cannot have something to say about the mass phenomena currently taking place, among other things, because masses are made of speaking beings who each identify with a specific trait creating an illusion of unity in what we call the group phenomenon.

Recently, the President of the United States with the support of the Attorney General, approved a Family Separation Law applicable to all immigrants who cross the border, including those who are seeking asylum.

The Attorney General, in an attempt to defend such position, cited a biblical text trying to support his argument. The President made a statement recently by signing an executive order that "puts an end" to the family separation policy which he had approved with the support of his administration. It is expected that no more families will be separated with the executive order, but nothing has been said of the change of status or reinstatement of conditions of freedom for the more than 2,300 children currently detained. The decision to sign that order arises in response to the global and local protests generated from the relentless application of this "Law".

Although it is not a secret that the United States has had policies in place throughout history that supported segregation and racism, it is also well known that important battles have been won in this respect, which have reinstated basic Human Rights: the abolition of slavery, the end of the policy "separate but equal", among others.

This means that it is not new for the United States to approve policies that support racism, or in politically correct terms, for the country to implement policies aimed at protecting "National Security" at any cost, especially when the cost results in the segregation of a large part of the population. The Attorney General and the President have shown in their arguments that this is deep down an issue of racism. In their own words, the Central American population is "harmful and dangerous" to the United States.

This population (which is the one  targeted today, tomorrow will surely be another one) remains in the role of the enemy. For the American people (approximately 37%) that still support and agree with these policies, these immigrants represent "the stranger" that Zygmunt Bauman proposed in his work Modernity and Ambivalence; the stranger is that person who is unfamiliar and still unknown ... but this rarity has a dark side: when a person is placed outside, at the margins of society, they constitute a constant threat. They are a threat within the imaginary order for those who fear them, but with the possibility of becoming a threat that personifies the Real at stake as seen in the case of terrorist attacks (domestic and international ones, and more recently in the proliferation of mass school shootings).

Following some of the proposals given by Eric Laurent in his text Disruption of Jouissance in the Follies under Transference, and taking into account the Freudian formulations on racism, I wonder if this "Policy of separation of families" inhabits at its core a "hate toward the other"[1]. In this article, Laurent reminds us of Miller's indications about this: "In the hate toward the Other, it is true that there is something more than aggression. There is a constant of that aggressiveness that deserves the name of hate, and that points towards the real in the Other. What makes that Other an Other so that he can be hated... so that he can be hated in his being? And well, it is the hate of the jouissance of the Other. It is here where we can give the most general form to this modern racism, [at least] this is what we can verify. It is hate in the particular jouissance of the Other"[2]

Lacan warns about the re-emergence of a radical racism during that interview that we know as Television when he responds to a questions regarding this issue, and he points out that the future will bring the crudest forms of racism, raising the threatening possibility of the return of a nefarious past.[3]

Psychoanalytically speaking, it has been the only aspect that allows us to locate the excessiveness of the policies that have been implemented regarding this Central American population (without referring to all the other populations that fall into this spectrum under various "forms" of "executive" policies that are being "signed" and approved quite frequently).

And it is precisely that "excessiveness" that has caused certain sectors of the North American community to make a statement through an act, which apparently the international community seems to be able to read - at least in this particular case of the "Policy of separation of families". While it is true that this excess is covered by a law, the paradox is that the law itself is excessive even when it was created within a democratic system, at a historical moment in which it had been assumed - until now - that the laws reinforced limits. In this particular case, it seems to be a Law that represents the overflowing of jouissance that inhabits it, insofar as it is a different jouissance that is taken in the form of an imminent threat where the other remains in the radically imaginary place of the enemy.

It is no longer an exclusive knowledge of psychoanalysts that language serves to lie, that semblants are semblants and not absolute truths and that the millennium brought new forms of ordering and a fierce push toward low blows in the place of the ideal. These are the times of the Festival of Insignificance as Milan Kundera points out in his last book.

Psychoanalysis has shown the havoc effects that this generates and it is at the core of our ethics to take a stand on these matters. 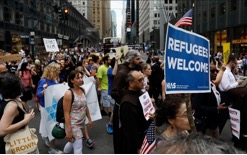