We are pleased to announce the publication of a new issue of Et Lacan, whose 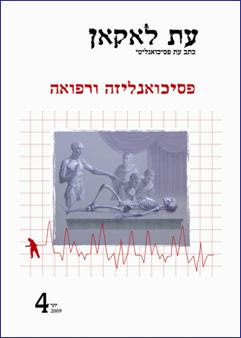 theme is "Psychoanalysis and Medicine."

The issue begins and ends with articles in which what is at stake is the subject's position with respect to death. At the threshold, the testimony of an analysand who makes his voice heard as a subject grave illness confronts him with an expected death. The very failure of analytic interpretation is what enables this analysand to formulate what might be a position that would give place to life even at the limit of death. The issues ends with an analyst's theorization of the same point. These are the parentheses between which the various contributors to this issue read and write its theme.

What is unfolded in the variegated movement of this writing indicates at once the magical value of words which is at the basis of medicine as much as of psychoanalysis and the limits of their efficacity.

Work on this issue led to the dialectical inversion of a position formulated at the inception of its conceptualization, a position which took the form of a question posed by psychoanalysis to medicine. The issue returns this question to its addressor in inverted form. The concerns raised by this issue are directed to the psychoanalyst just as much as to the doctor.

The issue was born of the determined desire of our friend and colleague Yale Lahav and is dedicated to her memory.