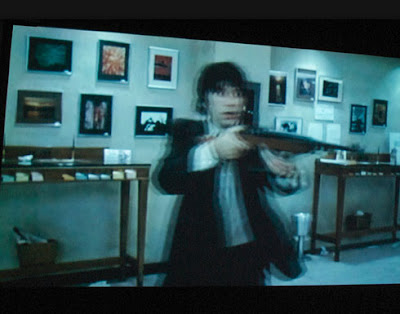 "The shock of 1914 was – in Badiou’s terms – a desastre, a catastrophe in which an entire world disappeared: not only the idyllic bourgeois faith in progress, but ALSO the socialist movement which accompanied it. Lenin himself (the Lenin of What Is to Be Done?) lost the ground under his feet – there is, in his desperate reaction, no satisfaction, no “I told you so!” THIS the moment of Verzweiflung, THIS catastrophe opened up the site for the Leninist event, for breaking the evolutionary historicism of the Second International – and only Lenin was the one at the level of this opening, the one to articulate the Truth of THIS catastrophe. Through this moment of despair, the Lenin who, through reading Hegel, was able to detect the unique chance for revolution, was born. His State and Revolution is strictly correlative to this shattering experience – Lenin’s full subjective engagement in it is clear from this famous letter to Kamenev from July 1917:
– Entre nous: If they kill me, I ask you to publish my notebook “Marxism & the State” (stuck in Stockholm). It is bound in a blue cover. It is a collection of all the quotations from Marx and Engels, likewise from Kautsky against Pannekoek. There is a series of remarks & notes, formulations. I think with a week’s work it could be published. I consider it imp. for not only Plekhanov but also Kautsky got it wrong. Condition: all this is entre nous.”
Bookmark This Link to BLOG/RSS FEED
http://www.lacan.com/blog/index.html