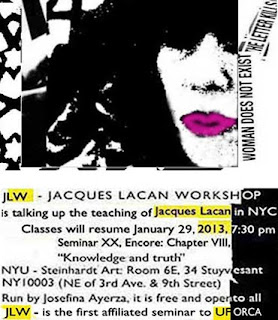 Today I am going to try to speak about knowledge, about that knowledge which, in the inscription of the four discourses - on which the social link is based, as I thought I could show you - I symbolized by writing S2 Perhaps I will manage today to make you sense why this 2 goes further than a secondariness in relation to the pure signifier that is written S1.


Since I decided to give you this inscription as a prop on the blackboard, I am going to comment on it, briefly I hope. I did not, I must admit, write it down or prepare it anywhere. It doesn't strike me as exemplary, if not, as usual, in producing misunderstandings. In effect, a discourse like analytic discourse aims at meaning. By way of meaning, it is clear that I can only deliver to you, to each of you, what you are already on the verge of absorbing. That has a limit, a limit provided by the meaning in which you live. I wouldn't be exaggerating if I said that that doesn't go very far. What analytic discourse brings out is precisely the idea that that meaning is based on semblance ce sens est du semblant. If analytic discourse indicates that that meaning is sexual, that can only be by explaining its limit. There is nowhere any kind of a last word if not in the sense in which "wod" is "not a word" mot, c'est motus - I have already stressed that. "No answer, not a word", La Fontaine says somewhere, meaning indicates the direction toward which it fails.
[…] We'll start with the four propositional formulas at the top of the table, two of which lie to the left, the other two to the right. Every speaking being situates itself on one side or the other. On the left, the lower line - ⍱xФx - indicates that it is through the phallic function that man as whole acquires his inscription (rend son inscription), with the proviso that this function is limited due to the existence of an x by which the function Фx is negated: Ǝx(Фx) ̅. That is what is known as the father function - whereby we find, via negation, the proposition (Фx) ̅, which grounds the operativity of what makes up for the sexual relationship with castration, insofar as that relationship is in no way inscribable. The whole here is thus based on the exception posited as the end-point, that is, on that which altogether negates Фx..."