The second issue of Hurly-Burly, the journal of the New Lacanian School, has been released. I was going to write a short text about it, the importance of the pieces selected for the issue, and the ways in which so many of them focus very precisely on what is at stake in psychoanalysis, in our practice, in the desire for psychoanalysis or the desire of the psychoanalyst. Anne Lysy-Stevens, however, has provided such a wonderful description of the journal in her Editorial that I am grateful to reprint it here, with the permission of Sophie Marret.

So, below, you will find the Editorial and Table of Contents for the issue.
Hurly-Burly is available at the online bookstore of the École de la Cause freudienne. 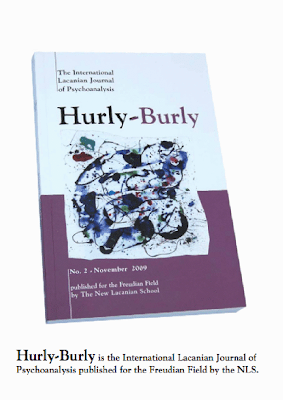 Scilicet - you can know: this is the name Lacan gave the journal of the EFP, which was his School at the time. You can know how analysis operates: such is the ambition of the second issue of Hurly-Burly, publication of the New Lacanian School, a young School of the World Association of Psychoanalysis which, through this journal in English, gives a voice to the Lacanian orientation.

There is no doubt that "how" resonates with "know how" and "do it yourself", the manual or practical guide, which elucidates instruments and method. Yet if psychoanalysis is in no way a philosophy, it is also not a technique, as Jacques-Alain Miller reminds us in this issue. It does not prescribe teachable, generalisable procedures, leading to predictable outcomes. "It is, let us say, an ethics." In his XIth Seminar, Lacan said that it was "a praxis", i.e. "a concerted action by man […] which puts him in the position of treating the real with the symbolic." Unlike science, where the desire of the physicist, for example, is not called into question, the desire of the operator, "the desire of the analyst", for its part, cannot be left out of the question, "for the simple reason that the problem of the training (formation) of the analyst poses it."1 The impact of words, to become an analyst: these are the two major axes of this issue; they are also two constant preoccupations in Lacan's teaching.

Lacan never ceased, for the whole length of his teaching, and from different angles, wondering "how it operates", how psychoanalysis, which operates with words, with sense, can have an impact on the real, the impossible-to-say, the outside-meaning. From beginning to end, he wondered about the impact of words: "There are words that have an effect and words that don't. That's what is called interpretation", he said in 1974. The reader will discover a series of articles on "Lacanian interpretation", the proceedings of the VIIth NLS Congress of May 2009 on this theme. He or she will be able to see, through case presentations as well, that Lacanian interpretation, as J.-A. Miller said, extends beyond Freudian interpretation, which deciphers sexual meaning, to point "beyond it towards the inexistence of the sexual relation", i.e. "a structural, given absence: the impossible-to-say." He or she will understand, reading Éric Laurent's text, that another conception of language, neither a structuralist nor a post-structuralist one, is at play here, where the signifier and jouissance, the word and the body, meet. Psychoanalysis must "undo through speech what has been done by speech", said Lacan in 1977. Speech wounded, speech fixed the jouissance of a subject. How can interpretation touch jouissance?

An analysis is an "experience", which produces a "metamorphosis"2 of the subject. The psychoanalyst is him - or herself the product of his or her analysis. Lacan completely renewed the question of the formation of the analyst by formalising the end of analysis and inventing the Pass, a procedure of transmission designed to investigate how a subject becomes an analyst – which has nothing to do with questions of rules relating to professional establishment. In this issue we can read Bernard Seynhaeve's precious testimony. He was named AS [Analyst of the School] at the outcome of his Pass; in this text he focuses specifically on interpretation.

The "PES" (Paris English Seminar), which followed on from the NLS Congress, this year dealt specifically with the end of analysis – the end, the interruption, or yet again the interminable. Several articles are gathered under its title: "When The Cure Stops…"

An analyst, when his or her analysis is "over", has not become a master, a scholar or "happy-go-lucky". He or she is not done with his or her unconscious or with transference: there remains "transference at work", transference to work and to psychoanalysis. As Lacan said, the analyst must remain "an analysand with respect to the subject supposed to know", i.e. must not stop confronting his or her "I don't want to know anything about it".3 The School is the place where each and every one may confront it, alongside a few others, starting from the absence of a preliminary definition of what "the" psychoanalyst is.

As this issue testifies, analysts are present in their time; they take an interest in philosophers, scientists and artists. Most of the texts presented here were generated by School events: past or future Congresses (like the next WAP Congress on Semblants and Sinthome), seminars and encounters in various places in Europe. Although they pertain to the same orientation, they do not speak with the same voice; each has its singular touch.

Translated from the French by Veronique Voruz 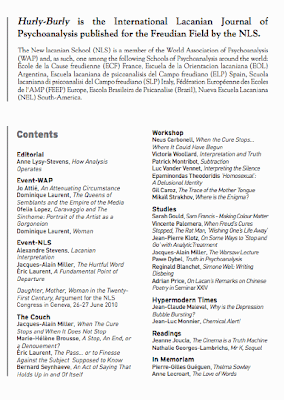