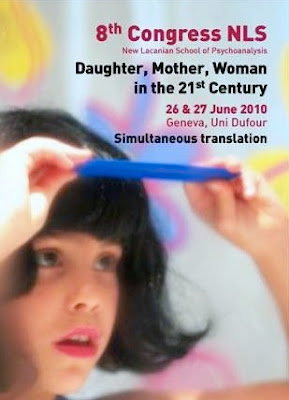 Daughter, Mother, Woman in the 21st Century
Pierre-Gilles Guéguen
President of the NLS

The 20th Century was the century of the emancipation of women and feminism. According to certain authors, the 21st century marked a regression from the movement of the Seventies, even a reactionary return to a previous state to that of its ‘conquests’ such as the widespread use of contraception, the extension of the right to abortion or the most equal rights between men and women. A new essentialism (like the supposition of a ‘feminine nature’) and a new array of theories of a supposed maternal instinct contribute to a reverse of the feminine condition. (1)
On the other hand, in the name of a developed social constructivism, the sexuation of the woman (and of the man) is reduced to the sum of sexual practices, casting aside the fact that in sexuation and the sexual relation there is a real at play, a sexuated body that enjoys and that bears the weight of language (2), forgetting that it is a sinthome. (3)
Freud already had to deal with a certain emancipation of women, patent in the cases of Dora and The Young Homosexual Woman. It was part of a significant turning point, a change of attitude and the transformation of social roles (let us think of his discussions with Jones on feminine sexuality or his analysis of Hans’s mother, for example).
Social victories and the transformations of modes of jouissance that were gained, have not altogether resolved the way in which women make do with semblants to “become a woman”, to quote Simone de Beauvoir’s famous phrase. Lacan, in turn, in 1973 with his Seminar Encore, also took part in the debate and shook women, with such a lead over time that still now it enables us to interpret our times today.
What is the place of love between the sexes for women today? How do couples come together and also, how do they come apart? How do women live their jouissance and the mode of solitude it includes in our individualistic civilisation? How do they live pregnancy and birth? How can women respond to the solicitation of medical techniques with regard to procreation, for example, or the supply of aesthetic surgery? Many of these questions have taken on more weight in our society in the last ten years, in parallel with the decline of the paternal function and the object’s ascent to the zenith.
Equality in the workplace, the massive professionalisation of women (which Lacan already spoke of in his ‘Guiding Remarks for a Convention on Female Sexuality’), the dictatorship of the modern, standardised forms of masquerade, along with the choice now possible, of the moment of pregnancy and the prolongation of the period of fertility, they all also have their down side. The liberalism of lifestyles, which heightens both, a supposed symmetry of the jouissances and the incommensurable of feminine jouissance, pushes feminine subjects towards an exaltation of love but also towards devastation (ravage).
These are often subjects, exhausted by the war between the sexes, lost in their jouissance, suffering from a solitude hightened by their troubles in love, who address themselves to psychoanalysis in order to find there an answer to their questions on the feminine position.
It will be up to us, at our congress, to examine the symptomatic forms of this position, one by one.
As Dominique Laurent indicates (4): “From the Freudian anatomical lack to the lack of the signifier of The woman, the relationship of women to the semblant and to ‘a-speech’ (l’apparole) unfolds, to guard against this lack. So women know that it is up to them to give existence, in a singular fashion, one by one, to this being that has neither a signifying nor a libidinal essence." It is a forced choice, a decidedly anti-biological one. Psychoanalysis in our orientation can enlighten this question, therefore it must. This is what we will work on for this Congress.