A Rally of the Impossible Professions: Beyond the False Promises of Security‏ 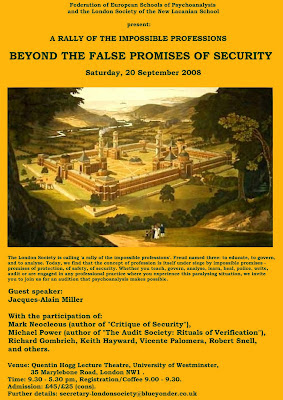 The London Society of the New Lacanian School
Please forward this message to any colleagues who may share these concerns
Dear Colleagues,
We stand in a moment of ever-increasing commodification and marketisation of public services, which has seen problems arising in the mode of reform in the NHS; excessive testing and league tables in education; a push to make changes in the relationship between the police and the citizen that erode officer discretion; and in the field of mental health, the impending regulation of the ‘psychological therapies’ threatens to impose a crushing standardisation of the talking therapies including psychoanalysis in various forms. This is to name just a few of the domains of civil life that are affected by these drives.
Against this background, the London Society of the New Lacanian School in association with the Federation of European Schools of Psychoanalysis is calling ‘A Rally of the Impossible Professions’.
Sigmund Freud named three: to educate, to govern and to psychoanalyse. Today, we find that the concept of profession is itself under siege by impossible promises; promises of protection, of safety, of security.
On Saturday, 20th September 2008, with guest speaker Jacques-Alain Miller, we will be pleased to welcome Richard Gombrich, Keith Hayward, Mark Neocleous, Michael Power, Robert Snell and an audience of participants bringing a wealth of experience from diverse fields of practice.
In this gathering of voices, we will open a conversation; one that listens for something “Beyond the False Promises of Security”.
Regards,
Penny Georgiou, Vicente Palomera
Chair Chair
London Society of the NLS Federation of European Schools of Psychoanalysis (FESP)
Postado por A.A.delaR. el quinta-feira, junho 19, 2008