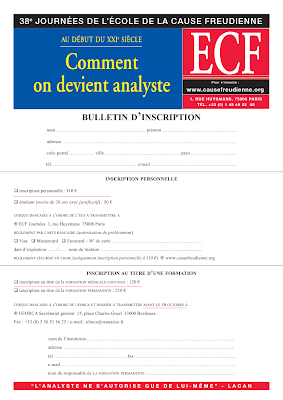 Jacques-Alain Miller – A New Concept For the 38th Study Days

The École de la Cause freudienne will be using for the first time a new concept for its Study Days in November, the thirty-eighth. This is something new, and it is an experiment. This means that the result, whether it turns out to be a success or failure, cannot be predicted. There is risk, there is no routine. Therefore, at the very least, there is no risk of boredom.
However, this is not a spurious or fickle try-out, it is an attempt that has been thought through, and one which links up several new elements.

The School used to give itself over each year to a vast and multiform campaign for the ‘preparation of the Study Days’. Across the board, in Paris and the provinces, hives of enthusiastic and methodical activity could be heard buzzing. Countless bees would set off to collect their nectar from a thousand different flowers to bring it back to the community under the impulse of a single, vigilant leadership. Meetings referred to as ‘preparatory’ would plough away on the theme in all directions, digging deep furrows in the problematic. A battery of publications accompanied this grand effort of learning and training. A committee called ‘scientific’ would supervise, gauge and rectify the productions in advance. When the Study Days came, everyone was familiar with the theme, and was able to follow the papers with full knowledge of the facts. And so the Study Days were for nigh on thirty years a powerful factor in the unification of the School, its members, its affiliates, and its public; a vehicle, as we say, focussing the teaching; and a happy moment to catch up with each other: ‘You, me, us, together, and long life to us all!’ The School would verify each year that it looked like itself. One element alone was lacking, had been sacrificed: surprise. But in view of the benefits the enterprise offered, that didn’t seem to be anything much.
Well, the time has come to realise that this ‘nothing much’ is worth as much as all the rest. No, it’s not about putting down the honourable past that the ECF owes a great deal to, but, on the contrary, it’s about building on what has been acquired in order to restore to the Study Days the character of an event. Our Study Days have until now been the logical conclusion, the quilting point, of a long ordered and continuous development. What if from now on they were to become a moment of rupture, a fertile time for a sudden unpredictable production, the collision of impulsive words that take not just the public unawares but the speakers themselves? Wouldn’t this be closer to what psychoanalytic method implements in its quest for truth?
Of course, something shall be lost in the operation, but that’s how it is, you can never win on all counts. And when you’ve been winning on one for a long time, the profit margin tends to come down, and then comes the time when it cancels itself out, and you have to speculate on another. At least, this is the wager.

Second element: one structure, and one alone