A limited number of Landmark Guest rooms (25) starting at $135. plus tax are available at Union Theological Seminary, which is right across the street from Barnard College. Please see all the information below. Everyone says these accommodations are very nice. But they get filled up very quickly for conferences and need to be booked very early or preferably immediately! Ideal would be to reserve a whole block of rooms since you cannot expect to pay much less than that in NYC.

This listing is a guide to area accommodations and is not an endorsement of these establishments.

This listing of garages is provided to assist your search and should not be interpreted as a recommendation by Barnard of these establishments. All rates are subject to change. For your safety, do not leave valuables in your car.

For longer list of parking garages, as well as for specific rate listings, please visitBestParking.com. To find parking in the Morningside Heights area, click "Daily," "By Neighborhood," and then select "Morningside Heights" on the map.

The neighborhood around Barnard College, Morningside Heights, is home to 35,000 people, as well as a dynamic mix of cultural, religious, and academic institutions; restaurants and stores. Stretching from about 106th Street to 123rd Street between Morningside Park and Riverside Park, it is 20 minutes from midtown Manhattan by subway. 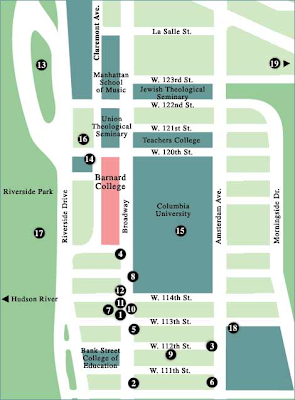 Barnard College is located on the Upper West Side of Manhattan between 116th and 120th Streets along the west side of Broadway. It is easily accessible by car, bus, or subway from anywhere in New York City, including the local airports. 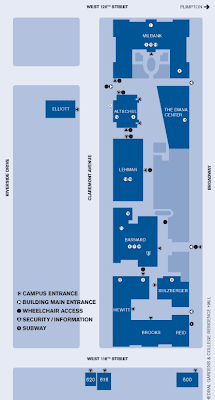 Barnard is located just across Broadway from Columbia's main campus, and is one of four undergraduate schools within the Columbia University system.

Barnard College is located on the Upper West Side of Manhattan between 116th and 120th Streets along the west side of Broadway. It is easily accessible by car, bus, or subway from anywhere in New York City, including the local airports.

From the Henry Hudson Parkway (West Side Highway):

To reach the Henry Hudson Parkway from the north:

From the south and west:

We recommend that you take a taxi from the train or bus stations if you are coming to Barnard for the first time.

New York City is an extension of the Barnard College experience, offering a wealth of internship and research opportunities, cultural and educational institutions, financial and international headquarters, and historic landmarks. These are just a few of the many resources Barnard students explore through coursework, fieldwork, internships –or just for fun.

American Museum of Natural History
Central Park West (79th Street)
Not only one of the world's largest natural-history museums, but also a major research institution. Its president, Ellen Futter, is a former President of Barnard College, BC '71.

Central Park
59th to 110th Street, Fifth Avenue to Central Park West
Probably the most well-known urban park in the nation, this oasis in the city has lakes, meadows, nature trails, and roads for runners, bicyclists, walkers, and rollerskaters.

Museum of Modern Art
11 West 53rd Street
Contemporary visual arts in all its forms--from sculpture to film to industrial design.

New York Public Library
Fifth Avenue (between West 40th and West 42nd Streets)
One of the largest research collections in the world, housed in a beautiful Beaux Arts building.

South Street Seaport
Lower Manhattan
This revitalized fish market is now an indoor-outdoor museum offering an assortment of free concerts and street entertainment, along with plenty of places to eat.

United Nations
1st Avenue at 45th Street
The UN includes the General Assembly, the Secretariat, the Council Buildings, and the Dag Hammerskjold Library.

Chinatown
These 40 square blocks on the Lower East Side are home to the largest Chinese community outside Asia. Take your pick of restaurants featuring Thai, Vietnamese, Cantonese, Szechuan, and dim sum.

Greenwich Village
"Eclectic and eccentric" says it all about the Village. Shop at the city's largest used clothing store (Antique Boutique) and a bevy of other stores, including McNulty's (250 varieties of tea) and Aphrodisia (800 herbs and spices). Go to Washington Square Park for great people watching.

Soho and TriBeCa
Soho (short for "south of Houston Street") and TriBeCa (short for "triangle below Canal Street") are artsy, funky areas featuring lots of art galleries, shops, and restaurants.

Off the Beaten Path

Dia Center for the Arts