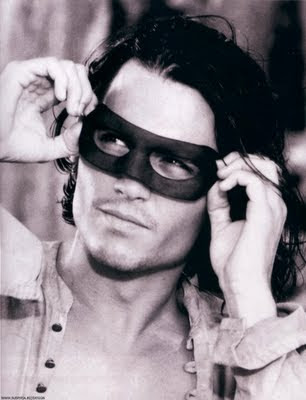 A sizzling hot midwestern night in Omaha provided a good excuse for participants to join the Circle for the Lacanian Orientation of Omaha in the cool theatre of the University of Nebraska at Omaha on June 30 for a screening of Don Juan deMarco and a presentation and discussion of The Feminine Fantasy of Don Juan.
While the film itself diverges in many significant ways from the classic presentations of Don Juan by Molière, Byron, or Mozart, it nonetheless was an interesting backdrop for a series of presentations by CLOO members Pam Jespersen and Tom Svolos on the sexual relation, feminine sexuation, and the myth of Don Juan. In her presentation, Jespersen introduced the Lacanian notion of a fundamental dysharmony in speaking beings with regard to sexuality. She articulated some classic Lacanian positions on the masculine and feminine positions with regard to the phallus, and she spoke of the place of love and seduction in the discourse of speaking beings, highlighting the element of seduction in the character of Don Juan. Starting from the final remarks of Jespersen, Svolos quipped how the director of this movie must surely have read Lacan, in opening the movie with the titles shown against the backdrop of the Don Juan character dressing, a veritable demonstration of the place of clothes "in what is essential to man, his attire," as Lacan noted in the first chapter of Encore, recalling the parakeet in love with Picasso. Svolos then elaborated two moments in Lacan's work in which he addressed sexuation: the late fifties and the texts in Écrits on femininity that focus on phallus as the signifier of desire and the different positions of the man and women with regard to that. Against this backdrop, Lacan, in Seminar X, articulated an approach to the myth of Don Juan as a myth of an uncastrated man. Then, drawing on the formulas of sexuation from Encore, Svolos described what he called three notions of the One: the One of Love [One plus One equals One], and the Plus-One of the male position of sexuation, which Lacan articulates with regard to the story of Achilles and the Tortoise, and the Minus-One of the feminine position of sexuation, which brings another perspective in which to approach this myth of Don Juan. The host, Gary Marshall, moderated a very lively discussion with the audience, who, as a group, were quite engaged with what was for some of them a very different perspective on the issue of the relations between the sexes.
This was the second event in the CLOO series on "Psychoanalysis and the Movies."
This program was cosponsed by Circle for the Lacanian Orientation of Omaha; Alegent Psychiatric Associates; and the School of Public Administration at the University of Nebraska at Omaha.
Postado por A.A.delaR. el sexta-feira, julho 08, 2011