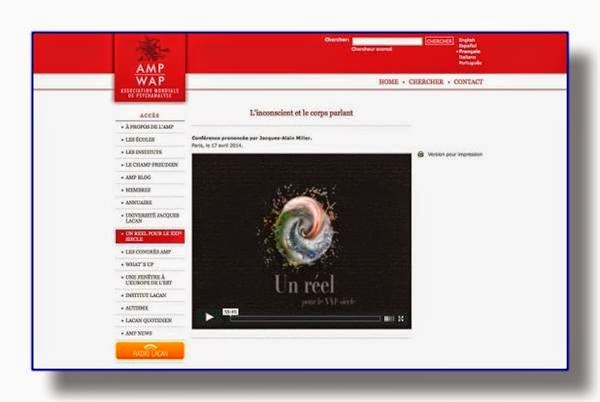 Watch the video up.

Rather than the icing on the cake, I'd prefer to think in terms of a beverage that I'm about to serve you as an after-dinner liqueur, to wash down the nourishment that this Congress  has given you and to whet your appetites with a thought for the next Congress two years from now. So, the expectation is that I shall set the theme for the next Congress and provide an introduction to it.

I was just thinking how this has lasted for over thirty years, if we suppose that this series of WAP Congresses took over from what were known as the International Encounters of the Freudian Field that began in 1980. So here we are again, up against the same wall.  Mur , the French word for "wall", is the word that has occurred to me, and this is evocative of the neologism that pokes fun at  amour : is it to  amur that I owe the invariable honour that has been bestowed upon me of setting the tone of the symphony, the symphony that the members of the WAP, whom we are, will have to compose over the next two years before we meet again? Is this the doing of transference, a transference that is brought back to the one to whom fell the onus of founding our association so long ago? But as I've just reminded you, the onus of setting a title, a name, or at least a theme, was something that I had assumed before, at the time of the first International Encounter that was held in Caracas, in Lacan's presence. If there is  amur , I would not refer it to the function of the founder, which nothing in our statutes sanctions, I would rather it were referred to the function of a guide, which is a function that I ascribed to myself by giving my Course the title  Lacanian Orientation.

Amur means above all that the wall of language has to be pierced through anew each time in order to try to grasp more tightly, let's not say the real, but rather what we do in our analytic practice. In the end, though, to orient myself in Lacan's thought has been my concern, and I know that this is something we share. In fact, the World Association of Psychoanalysis has no other cohesion but this. At least, this concern is the fundamental principle behind the gathering that we form, above and beyond the statutes and the insurance systems, and even beyond the ties of friendship and sympathy that have grown between us over the years.